A funny romantic comedy about how opposites definitely do attract…

Sara Di Giovanni is a successful lawyer in New York City: she is the star of her profession, an excellent role model to her very vivacious little sister, but has so far been unlucky in love…

Ethan Phelps is the rich playboy trouble-maker whose only talent in life is spending money and dating women… That is until Ethan’s father dies with no will to his name, leaving his two sons the legal heirs to his billion-dollar company.

Sara is forced to become the court-appointed guardian to handle Ethan’s share of the fortune, as his family do not trust him to manage it himself. Sara thinks it should be easy, but it’s not so simple when Ethan is determined to get rid of her by whatever means necessary…

What ensues is a dramatic and hilarious power-play between Sara and Ethan… but what will happen when feelings start to get in the way?

Kirk considered himself a calm man. He hated heated confrontations, especially family ones, but the question of who was going to take up the reins was something that he really shouldn’t have ignored in such an irresponsible way.

He still couldn’t believe that Markus had not left a will. Nothing, not even a couple of lines written on a sheet of toilet paper or on the back of a receipt from some bar. He had searched every single corner of the house and the office and contacted all the notaries and lawyers in the country and beyond before resigning himself to the truth. It was obvious that his brother had not expected to die so suddenly and that he must have thought he had all the time in the world to deal with the delicate question of his succession.

He should have known, though, that life is always full of unexpected surprises – rarely pleasant.

An intelligent man like Markus should have got his affairs in order and made some decisions. And instead he had done nothing. It was unbelievable.

And now it would be all of them who would pay for this lack of foresight.

Kirk wiped his forehead nervously with his hand as he watched the crowd in front of him getting noisier and noisier by the minute. Even James, sitting serious and composed on his right, did not seem to be handling it much better than he was. He was wearing, as always, his work uniform – a grey suit and a dark tie – but his expression was much more agitated than usual.

“He can’t not come,” he whispered tensely. His uncle gave a nervous laugh, playing for time before answering.

“Of course he can,” he replied, pretending to be calm. “It’s his right to ignore us, guaranteed by nothing less than our most beloved constitution. Even though, to be perfectly frank, his not turning up would be the best thing that could happen…” A part of him actually hoped that the damn lunatic would decide to stay away from the meeting. His absence might cause some small problems when it came to the moment of voting, given the share of the company he possessed, but at least that way they wouldn’t be exposed to public humiliation.

“And leave us like this, without a majority?” hissed James, gripping the pen he held in his hand so tightly that he almost snapped it in two.

Kirk turned to look into his eyes, where all of his agitation was clearly visible. James, who had been a rock in recent years, was still not used to hiding his feelings when it came to family matters – but he would be forced to learn how to, just as many others had done before him. “There is every probability. But we must not show concern. Smile – at the end of the day, that’s what they’re all here for.”

“What do you mean, to see us suffer?” his nephew asked resentfully.

“Exactly, and we must not let that happen.” And so, Kirk smiled as if he had only one problem in the world – that of trying to set a good example.

In the meantime, a man who all present knew very well stood up. Ed Turner, who immediately silenced the audience with his menacing presence.

“Kirk, what the hell are we waiting for?” he asked as if all present weren’t perfectly well aware. “I mean, this meeting was due to start at half past ten and it’s nearly eleven – we’ve been patient for long enough, don’t you think? Everybody who wants to participate in our humble little meeting is here. And they’ve been waiting for quite some time, if I may say so…” He finished his sentence with a theatrically sarcastic laugh.

Turner was a billionaire who had never hidden his desire to sooner or later gain a controlling interest in Phelps & Phelps. He collected shares the way other people collected snow globes and didn’t like being told ‘no’ – and that was a word that Markus and Kirk had said to him repeatedly over the last decade.

As we all know, though, the wheel of fortune never stops turning, and this time it seemed that it had suddenly turned for Turner. Old Markus had been a pleasant enough fellow – perhaps not particularly profound, he thought, and perhaps with a slightly excessive taste for young beauties, but he had always been cheerful and happy to be the centre of attention. He’d claimed that he only did it for the sake of the company, but in Ed Turner’s modest opinion, narcissists always managed to find some excuse that calmed their very slight sense of guilt. Kirk sat up straight in his chair. “We will be commencing very shortly. What’s all the hurry?” he asked, feigning indifference.

Turner turned to him. “Everyone knows that Ethan will never come,” he said glacially, with just a touch of satisfaction. The fact that he had dared to pronounce that name did not escape the attention of the crowd, which immediately resumed its murmuring. 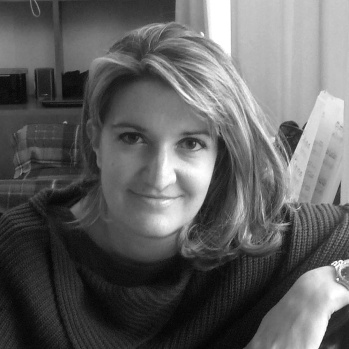 Anna Premoli is a bestselling author in Italy. She began writing to relieve stress while working as a financial consultant for a private bank. Her novel Love to Hate You won the Bancarella prize in 2013.