We’re celebrating the release of Rustic Hearts by Amber Kelly! Braxton and Sophie’s chemistry is off the charts! One-click yours today!

The last place Sophia Lancaster wanted to return to was Poplar Falls. It’s the place that holds all the painful memories and unanswered questions she’s ever had. One phone call causes her life to take a turn, forcing her back to the town she hasn’t stepped foot in over twenty years.

And right into the path of Braxton Young.

His blue eyes, sinful smile, and rough exterior are no match for Sophia. She’s there for one reason, and it isn’t to fall in love. The sooner she can get out of this small town and back in New York City—the better.

However, fate doesn’t care for either of their desires. Instead, they’re forced to deal with each other, finding their differences aren’t as great as they thought. Each day brings them closer to friendship and the possibility of something more. The answers she seeks might not only break her and Braxton apart but also her heart.

Amber Kelly’s writing is such a refreshing change to most of the narratives on the market today, that it is simply captivates me from the blurb itself! Rustic Hearts was no different. An enemies to lover’s romance, set on a ranch in Colorado, it brought me back to the roots of why I love to read. The story of Braxton and Sophie was so genuine and full of so much heart that it truly gave me all the feels!

The passion between these two forbidden lovers is so poignant that seeing their relationship develop is subtle at first and then engulfed in flames once things began to truly ignite between them. Sophie is navigating her way in Poplar Falls having been gone for over 20 years, and when she finds her once home isn’t what she remembers it to be, but so much more you really get all the emotions of someone missing something from their life’s. While this is truly a romance at heart, the family ties and connections built throughout are so well entwined that Amber has done a phenomenal job of making a very authentic and natural story from it all. It was a pleasure to read this book and I loved all the ups and downs she weaved throughout Sophie’s story. All the secondary characters truly become as major part in telling the journey Sophie must go on and I wish they were all my family too!

Bravo on another heartwarming tale that I simply fell in love with instantly!

I wake up to the sound of yapping. I’m pressed against something warm and hard. I peek one eye open and see a broad, muscular back.

I sit straight up. Too fast, and the room spins. I bring my head to my hand to steady it because it feels like my brain is about to pound its way out of my skull.

“Shut up, Hawk,” I hear Braxton’s sleepy voice command before he lightly chucks a pillow at the excited puppy at the end of the bed.

Hawk grabs the pillow with his jaw and yanks it back and forth before settling and chewing on it like it’s a bone.

“This is why he’s not allowed in the bed,” he mumbles.

I look back down at the puppy. “But he’s such a good snuggler. Aren’t you, Hawkeye?” I coo at our furry bedmate.

He takes my soft tone as an invitation. He drops the pillow and hops his way up to my lap. Then, he plants his paws on my chest and starts licking my face.

I giggle, and that makes my head hurt worse. “Ouch. My head.”

Braxton rolls over and looks at me. I’m sure I look frightful.

“You need some ibuprofen?”

“That would be great.”

I take it from his hand and bring it to my lips. It’s a big deal. Drinking after him. I don’t do that. Not with anyone, but for some reason, I don’t mind this morning.

“You have a horrible poker face.”

“So I’ve been told.” I hand him back the bottle and pull Hawkeye into my lap. “So, what’s happening here exactly?”

“All we did was sleep last night,” he reassures me.

“What do you mean then?”

“We’ve kind of had this whole bitter, judgmental, standoffish relationship going on. It was comfortable. I don’t know what to do with this. Are we calling a truce or something?”

He appraises me for a moment, and then he sits up and stretches. Damn, he is pretty. Then, he plants his arms on the bed and leans into me.

“It’s you, so I don’t want to make any assumptions.”

Then, he jumps up and walks to the bathroom.

I look down at Hawkeye squirming in my arms. “Did that clear it up for you?”

I hop up and grab my jeans from the armchair. I quickly pull them on while he is in the bathroom. I peer out the window beside the door that leads down to the side of the house. It looks quiet, but I know that my aunts and probably Emmett and Daddy are up. I wonder if they realize I’m missing yet.

I jump at his voice and quickly turn. “Just looking to see if anyone is stirring yet.”

I look at the alarm clock by his bed. It’s 7:06 a.m. These people have no concept of what is and isn’t late.

“Madeline heads for the stables early on Sundays, and Ria and Doreen will leave for church soon. You can sneak in then.”

Whew, that’s a good plan. Emmett and Daddy will be much easier to slip by than the women.

“I bet Aunt Doe tried to wake me for breakfast and church. Think she’ll believe that I stayed at Dallas’s house last night?”

He shrugs. “Or you could tell her the truth.”

“Tell them I slept up here?” I squeak out.

“It’s not like I ravaged you, Sophie. You drank too much, and I let you crash up here, so you wouldn’t wake the house up, stumbling in. They won’t care.”

My face heats at the thought of him ravaging me. He must notice because he moves closer to me. I instinctively back closer to the window.

“You kissed me,” I whisper.

“Let me know when you figure it out,” he says as he leans in and slides his hand around my waist, running his little finger across my exposed skin. Then, he dips it low, and I gasp as it moves me into him, hip to hip. Then, he wraps his hand around something hanging at my back and pulls it from behind me. “Come on, Hawk,” he says without looking away from my face.

The puppy hops up from his perch on the rug and trots over, and Braxton bends down to attach the leash to his collar. Then, he stands back up and reaches for the door handle.

“Be right back. Make yourself at home. There’s a coffeemaker on the counter and supplies in the cabinet above it, but I’m fresh out of soy milk.”

He leads Hawkeye out the door and closes it behind them.

I let out a breath. Get my hormones in check and make coffee.

When they return, I’m sitting on the sofa with my mug, checking e-mail on my phone.

He lets Hawkeye off the leash, and he runs to me. “I think you have a new best friend.”

I reach down and scratch him behind the ear as I whisper conspiratorially, “That’s why I let you in the bed last night. To buy your love and devotion.”

“Just remember who feeds you, mutt.”

I reach down and cover his ears. “Daddy didn’t mean it,” I utter softly.

I look up at Braxton as he pours a cup of coffee.

“This used to be my play space, you know.”

He considers me as he stirs in the milk. “Is that right?”

“Yeah. It wasn’t this.” I gesture to the one-room apartment.

It’s studio-style with a huge king-size bed that faces a fireplace with a large flat-screen TV mounted above it. The seating area with a small sofa and armchair are left of the bed, and a tiny kitchenette with a microwave, coffeepot, and refrigerator are to the right, with a small island and sink. The large walk-in closet and bathroom with a good-sized tiled shower but no tub are right behind the wall that rests against the bed. There isn’t much in the way of décor but it’s painted a soft cream and accented in rich dark browns and navy.

“It used to be an old loft over the barn where they stored hay bales until Daddy and Emmett closed it in for me one year. It wasn’t anything fancy, just a big, open space where I kept all my art supplies. Dallas and I would play up here, and sometimes, when she slept over, Momma would let us set up a tent and camp in it. I would sit at an easel, facing those front windows, for hours and sketch the ranch, the horses, the house, everything. Gram would gush over and proudly display every creation.”

“Yep. It was just drywall and windows and not much else. Walker and I spent the entire summer after graduation plumbing it, installing the bath and kitchen, and building the fireplace. Moved in it from the main house October of that year.”

We hear Aunt Doreen’s car start, and he looks out.

“You’re all clear. They just pulled out of the gate.”

I bend and give Hawk one last snuggle. Then, I stand and grab my things. “I’ll return your T-shirt.”

He heads toward the bathroom again and then turns as I open the door.

“Don’t forget; we have driving lessons this week. A bet’s a bet.” 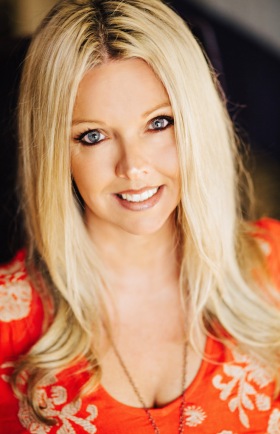 Amber Kelly is a romance author that calls North Carolina home. She has been a avid reader from a young age and you could always find her with her nose in a book completely enthralled in an adventure. With the support of her husband and family, in 2018, she decided to finally give a voice to the stories in her head and her debut novel, Both of Me was born. You can connect with Amber on Facebook at facebook.com/AuthorAmberKelly, on IG @authoramberkelly or on twitter @AuthorAmberKel1.