Cassie Beresford has recently landed her dream job as deputy head teacher at her local, idyllic village primary school, Little Acorns. So, the last thing she needs is her husband of twenty years being ‘outed’ at a village charity auction – he has been having an affair with one of her closest friends.

As if it weren’t enough to cope with, Cassie suddenly finds herself catapulted into the head teacher position, and at the front of a fight to ward off developers determined to concrete over the beautiful landscape.

But through it all, the irresistible joy of her pupils, the reality of keeping her teenage children on the straight and narrow, her irrepressible family and friends, and the possibility of new love, mean what could have been the worst year ever, actually might be the best yet… 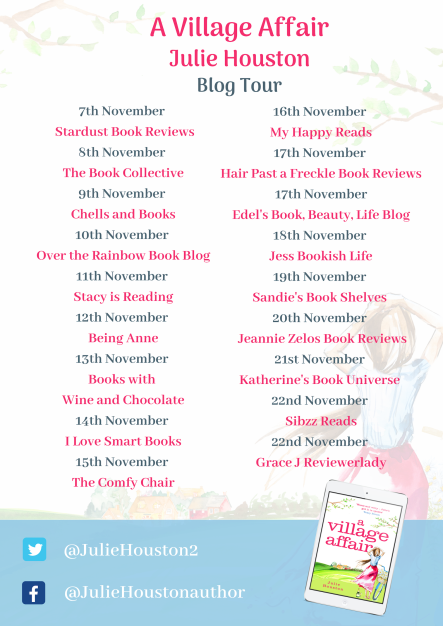 ‘Would you like one of these?’ I looked up from my place in the queue at the bar and saw that, close up, the man from down the bottom of the table was ticking even more of the boxes on my ‘The Man I’m Going to Marry’ list, first created at the age of eight and refined ever since. Tall, blue eyes, smiley face, no (visible) tattoos and wearing a suit. Tick, tick, tick, tick. And tick.

‘Thanks.’ I moved away from the post-speech scrum at the bar and followed him across the wooden dance floor, where the DJ was revving up to blast our ears with eighties’ favourites, towards an empty table at the back.

‘I didn’t realise you were Davina’s cousin,’ Mark smiled, pouring me a glass of champagne and managing to brush my hand with his own as he did so. When I didn’t reply – couldn’t reply because, in my nervousness at being alone with this man I’d spent the last two hours surreptitiously gazing at over the megalithic floral decorations, my ability to swallow appeared to have deserted me. I’d taken a ridiculously huge gulp of extremely gaseous champagne and now it appeared to have nowhere to go except into my lungs, which would result in it being spat out over Mark’s morning-suit trousers or down my nose, which would surely be the end of a beautiful relationship before we’d even begun.

I managed to smile as well as one can smile with a mouthful of gas and liquid and hoped I appeared somewhat enigmatic as opposed to mentally deranged.

‘Are you OK? Can I get you a drink of water or something?’

Mustering all my strength, I willed my throat to open and swallowed the recalcitrant champagne. The resulting coughing fit and streaming eyes drew the attention of my nan who, seeing me struggling, bustled over and thumped me firmly on the back of my new and expensive little designer jacket.

‘Are you all right, love?’ Nan turned to Mark and said confidentially, ‘Used to be a bit asthmatic when she were a little girl. If ever she got over-excited – Christmas, birthdays, a day out at Southport and the like – we had to watch her, you know.’

‘Nan, I think I had one wheezy attack one Christmas,’ I managed to splutter through another bout of choking. ‘The drink’s just gone down the wrong way, that’s all.’

‘Come and get some fresh air,’ Mark smiled, standing and wrapping his jacket round my shoulders. Out of the corner of my eye I could see Fiona, Tina and Clare – who’d obviously bonded over the lemon tart – nudging each other and making surreptitious thumbs up signs in our direction.

The rain had finally stopped and quite a few of the guests were outside sharing a crafty fag or simply enjoying the cool summer evening breeze after the stuffiness of the hotel reception room.

Once outside, Mark led the way across the wet lawn to a dry-stone wall that separated the hotel grounds from a glorious wildflower meadow sporting cowslips, early purple orchids and the tiny blue flowers of leadwort.

‘How do you know what they are?’ Mark asked, impressed as I rattled off their names.

‘My granddad. He doesn’t believe in planting lupins and gladioli in his garden. Beyond his allotment there’s a small field that no one seems to own and over the years he’s thrown tons of wildflower seeds at it and now it’s almost famous: “Norman’s Meadow” it’s called locally…’

‘And you? What are you called locally?’ Mark smiled down at me from his six-foot height and, as he reached out a hand and gently rubbed mascara from my cheek with the ball of his thumb, I felt such an unexpected lurch of anticipation and excitement that I was in danger of toppling over into the meadow and happily drowning in the sea of beckoning wildflowers.

Before I left home and Yorkshire for Derby I’d not clocked up a great deal of experience of men, and any dates I did have I’d made sure had finished at the bus stop in town: there was no way I was bringing anyone back to our house to meet Paula. Once away at university and now living in Derby, things had been a bit different and I’d had what I suppose was my fair share of men, but relationships had never lasted long. If I felt they weren’t going anywhere – which in my book was finding a man who wanted the same things that Paula scoffed at and I craved: a mortgage, semi, two kids – I generally ditched them. ‘I’m “Our Sandra” to my nan…’ I took a deep breath, ‘… Cassandra Moonbeam to my mum. And Cassie to everyone else.’

‘Well,’ Mark said, smiling and bending his face to mine, ‘I shall call you Cass, if that’s OK with you?’

I smiled right back. ‘That’s very OK,’ I breathed, leaning into him. ‘Very OK indeed.’

Julie Houston is the author of The One Saving Grace, Goodness, Grace and Me and Looking for Lucy, a Kindle top 100 general bestseller and a Kindle Number1 bestseller. She is married, with the two teenage children and a made cockerpoo and, like her heroine, livs in a West Yorkshire village. She is also a teacher and a magistrate.