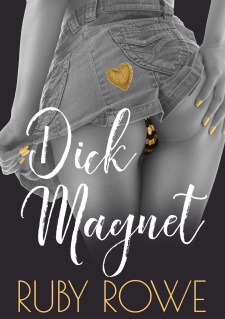 I’ve loved Chloe for as long as I can remember, and I’ve watched her ignore that love for just as long. She’s a dick magnet, engaging in meaningless sex with men who chase after her, but it’s only to avoid what she knows is true. Her heart belongs to me. It’s time to put an end to the bullshit and find out what happened to make her fight me all these years. It’s time to take Chloe off the market.

Ben owns my heart. I’ve known it for as long as I can remember, but something happened when we were sixteen that made it impossible for us to be together. Ever since, I’ve used alcohol and meaningless sex to fill the void of his love. Ben’s determined to make me admit my feelings for him, but he doesn’t know the shocking secret. To protect his heart, I have to keep it that way. I’ll sacrifice my happiness, and one day, he’ll find someone new to love.

This story is a standalone, but if you’d like to learn a little backstory on some of the characters, read Summer Trouble and Peer Review first, previous Ruby Romp Novellas.

Ruby Rowe began writing in January of 2013 under the pen name Scarlet Wolfe,

and fell in love with the genre.

separate from her young adult romances. She’d like to branch out and release straight erotica;

however, she’s a romantic at heart, and believes it will be difficult not to include romance in

When not writing, Ruby reads naughty books about possessive, hot alpha males. She has an

addiction to Pinterest, pinning all the sensual photos she can find. She loves bacon, coffee,

and other flavors of ice cream besides vanilla. 😉 She hopes her writing will allow her readers

a reprieve from the real world, giving them an opportunity to live out their fantasies.

Ben and Chloe. Wew. Where to even start. I was excited to see a new novella romp from Ruby Rowe, and she did not let me down in the steam and angst department. This was a quick read and I had it devoured in one sitting.
In Dick Magnet we get the story of Ben and Chloe. Best friends since they were young. Secretly both crushing on each other since then as well. Ben has looked over her and protected her from herself time and time again. He’s finally ready for more, but Chloe has a reason they could never be together.
I must say, for the first time in a LONG time I didn’t see THAT secret coming. Their friendship turned romance is something that is so boy next door, that element alone made me fall in love with their story. When secrets are revealed, can their bond hold.
Great job on another amazing quick read Ruby! I can’t wait for what is next to come…