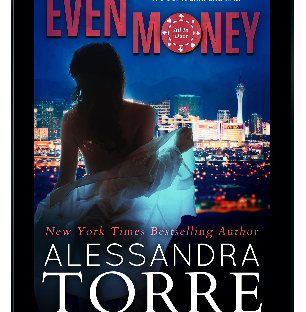 Sometimes it only takes a minute. A connection of eyes across a room, and everything changes. I was a cocktail waitress with a fondness for partying and meaningless sex.
He owned half of Vegas, with the reputation to match. I should have turned away. Instead, I stepped closer. Then, the lies started.
Rumors spread.
Stalking commenced.
And someone died. None of it stopped me from falling in love.

While I am fairly new to the work of Alessandra Toree, I am always excited when I see a new book of hers coming down the pipeline. This time, it is via a Duet that I was so excited to see it unfold. At first, I didn’t know what to expect from her writing, as I’d only seen Hollywood Dirt, one of her books made into a movie, via Passionflix. I immediately bought the book, fell in love, and started reading more of her work. Now, having read a few of her books now, I can say she has a new fan for life.

Going into Even Money, I wasn’t sure what to expect as the blurb is vague on story line. But let me tell you, that is the best way to go into this book. The story had a way of pulling me in from the first chapter, and I love how she has been able to put so much into the first half of this story. In Even Money, we get the story of Bell and Dario. She is a cocktail waitress in Las Vegas at an elite club, while he is the King of Vegas and the biggest playboy on the floor. Their connection is instant and the way their relationship grows and their story unfolds further, it truly is a unique story! Alessandra has such a way of adding angst to her writing that envelope you into the roller coaster of emotions and twists and turns she depicts in this story. The amount of twists and turns just when you think you know what is coming next in the story, made this so much fun to read!

While this does end on a cliffhanger, I am thrilled the gap between the two publish dates is so close. I only have a few weeks to wait until I get the end of the story and the answers I am desperate for…

Alessandra Torre is an award-winning New York Times bestselling author of fourteen novels. Her books focus on romance and suspense. Torre has been featured in such publications as Elle and Elle UK, as well as guest blogged for the Huffington Post and RT Book Reviews. She is also the Bedroom Blogger for Cosmopolitan.com.