After the Rain
Stacey Johnston

When a child is born they’re a blank canvas. A canvas that is later molded by the influences of the world around them. Those influences determine that child’s future, but they are not always kind. Some of those children will enter adulthood easily, unscathed by the harshness of life, but for others, that journey is not an easy path to follow.
And then there are those, whose journeys are cut short.
He only ever wanted ….. to fit in.
He only ever wanted ….. to be included.
He only ever wanted ….. to have friends.
Alec never wanted for anything.
His parents made sure of that.
But, what Alec desperately wanted, they couldn’t buy.
He just wanted to be normal……..
He could never see what the rest of us could.
Smart. Funny. Good-looking. Sensitive.
Alec only saw what his mind wanted him to see.
And believed the false truths it told him.
BUT, I won’t allow him to become one of the lost, and when the clouds clear after the rain, I WILL make him see that he is everything WE believe him to be, and so much more…….. 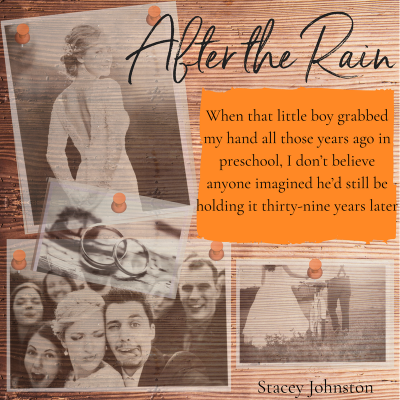 Lying before me in a sterile hospital bed is the love of my life, my husband; a man whose fragile soul has been at the mercy of that very same evil, vile creature for as long as he can remember. A man who always put the needs of others before his own, regardless of the cost to his own personal welfare. Or, he did, until three days ago when he decided that the people closest to him, the ones who love him unconditionally, would be better off if he were dead.
For nearly thirty years I have stood beside this man before me, watching as an unseen evil devoured him, digging its claws in, slowly destroying him. As I take Alec’s cold hand, I am hit with a barrage of memories – both happy and sad – of our life together. In retrospect, even the photos that line the walls of our family home show the face of a tormented man fighting an internal battle to stay in control. Unfortunately, fighting day in and day out, year after year, against something that powerful becomes tiring and eventually, it can take its toll.
As I look at Alec’s pale face while he sleeps so peacefully in his coma, I wish I could find what triggered his decision to end his life. Or, at the very least, when he reached that point of no return. Understanding his reasons is all I’ve been able to think about for the past three days since we found him unresponsive in our backyard. His empty medication bottles and the bottle of Jack Daniels lying beside him were apparent signs my husband had finally lost his battle.

Stacey Johnston was raised in Perth, Western Australia. She is a wife and mum to four children.
Having been an avid reader most of her life, Stacey finds herself most at ease when she can lose herself in stories of romance and mystery.
Stacey has a creative way of bringing suspense into her stories which keeps her reader hanging onto every word to find out how it ends.