From the bestselling author of BORN BAD.

Adele Robinson is locked up – convicted for the murder of her abusive father. She quickly realises that she’ll have to play it tough if she’s going to survive, and soon gains a reputation for standing her ground.

Meanwhile, her brother Peter is building his criminal empire on the outside – running protection rackets, seedy nightclubs and all manner of schemes to make a fast buck. He soon comes to the attention of, not only the police, but also Manchester’s rival gangs, and a turf war breaks out.

And when things start to get bloody, only Adele can step in to protect the family business. Will she get out in time to save Peter? After all, blood is thicker than water, and when family’s in trouble you can’t look the other way.

Before Adele could pull away, she heard someone yelling her surname. ‘What the fuck d’you think you’re playing at, Robinson?’ the woman at the door demanded.

It was Denise, Louise’s girlfriend. Adele didn’t have an opportunity to explain before she heard Denise advancing towards her.

Adele quickly prised herself from Louise and raised her bent right arm. With no time to turn round, she judged Denise’s position from the sound of her footsteps. Then she drew her arm back swiftly and jabbed her elbow hard into the soft flesh of Denise’s abdomen.

Adele didn’t give the other woman a chance to retaliate. She rose from the bed and stood to face Denise, who was stooped low, her hands gripping her stomach and her breath coming in short gasps. Before Denise could recover, Adele followed up with an uppercut to her face, which knocked Denise off balance and she crashed to the ground with her nose pumping blood.

Then Adele adopted a defensive kickboxing stance; left leg in front of the right, and hands forming fists in front of her face with her elbows covering her ribs. As she waited for Denise to recover and charge at her, the adrenalin was racing around her body and priming her for action.

‘Stop, stop!’ shouted Louise, dashing up to Adele and grabbing ineffectually at her left arm. ‘It’s not what you think,’ she called to Denise, who was now sprawled across the floor, still clutching her stomach.

Adele stepped back but maintained her defensive stance while she awaited Denise’s reaction. She could feel her heart thumping but she tried to focus on Denise.

‘What the fuck is it, then?’ gasped Denise.

‘Everyone knows I’m not gay, you silly cow!’ said Adele. ‘I was trying to comfort her, that’s all.’ Then she rounded on Louise, saying, ‘But I won’t fuckin’ bother in future if that’s all the thanks I get.’

She stormed out of the cell, leaving Louise to do the rest of the explaining to her girlfriend. A small crowd had gathered at the cell door: prisoners who had just returned from visiting. On the outer periphery of the crowd Adele could see two prison officers. One of them was Prison Officer Fox, otherwise known by the inmates as Sly.

Nobody liked Sly because of her attitude towards the prisoners, which was hostile and condescending. Sly was middle-aged, overweight and had a matronly bearing. She had plain features and her hair was short and brushed back from her face in a style that was more practical than fashionable. Sly had been married for thirty years and her sex life, or lack of it, was a constant source of speculation and amusement amongst the women.

‘What’s going on here?’ Sly demanded as she approached the crowd.

The women began to disperse and Adele quickly pushed her way through them and strode up the corridor. A confrontation with Sly was the last thing she needed. As she walked away she could hear Prison Officer Fox quizzing the prisoners around her. After a few paces Adele felt a tug on her arm and she swung round, ready to defend herself again. But it wasn’t Denise or Louise. It was her friend Caroline.

Adele turned to face her, her complexion now ruddy and her palms sweaty.

‘Yes, just a misunderstanding,’ snarled Adele. ‘I’m sure Denise will realise that once Louise has explained herself.’

‘Do you want talk about it?’

Adele looked into her friend’s face, and noticed how the soft folds of her features had settled into a frown. Seeing Caroline’s motherly concern, Adele couldn’t stay angry for long.

They entered Caroline’s cell, where she poured them both coffee from a flask.

‘Get that down you,’ she said, smiling at Adele.

Adele forced a smile in return.

‘What was it about?’ asked Caroline.

‘She was upset because her mother hadn’t showed up again. I was just trying to comfort her, that’s all.’

‘Ah, right. And Denise got the wrong end of the stick?’

‘As far as I was concerned, yes, but she may have spotted Louise trying to kiss me.’

‘It amazes me how she could try it on even though everyone knows you’re not that way inclined. Not to mention the fact that she’s already in a relationship with Denise.’

‘I know,’ laughed Adele. ‘And even if I was that way inclined, I don’t think Louise would be my type,’ she added, pulling a face to display her repugnance, then glancing down at her snot-stained top.

Then Caroline’s tone changed. ‘It was good of you to comfort her, though,’ she said. ‘Especially considering you didn’t have any visitors either.’ 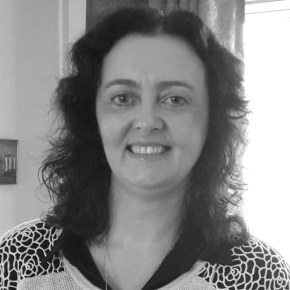 Heather Burnside is a Manchester-based author who, after taking a career break to raise a family, swapped credit control for writing and decided to study for a writing diploma. Heather had articles featured in several popular UK magazines before publishing her first Manchester-based crime thriller in 2014.