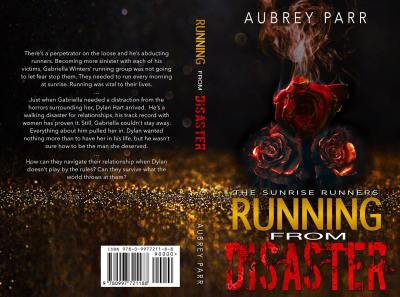 “Running from Disaster is book one in Aubrey Parr’s Sunrise Runners duology.”

There’s a predator on the loose and he’s abducting runners. Becoming more sinister with each of his victims, Gabriella Winters’ running group was not going to let fear stop them. They needed to run every morning at sunrise. Running was vital to their lives.

Just when Gabriella needed a distraction from the horrors surrounding her, Dylan Hart arrived. He’s a walking disaster for relationships, his track record with women has proven it. Still, Gabriella couldn’t stay away. Everything about him pulled her in. Dylan wanted nothing more than to have her in his life, but he wasn’t sure how to be the man she deserved.

How can they navigate their relationship when Dylan doesn’t play by the rules? Can they survive what the world throws at them?

It was already starting to get sticky, which was never a good sign for the day to come. Sticky in the dark meant miserable when the sun was beating down.
“Ugh, this weather blows. Maybe reliving my night will help keep my mind off this humidity!” Gabriella exclaimed before she went into a full fledge play-by-play of the night before. She seriously began to wonder if she had found the fountain of youth. She was definitely acting like a teenaged girl.
After she finished off the story with the effects of Dylan’s kiss and her ridiculous attempt at getting ready for bed while stuck in a cloud-nine haze, she realized they were half way through their run.
“See? Disaster averted,” Fiona announced.
“No. That’s the problem. The chance of disaster is even greater now!” Gaby said with almost a whine.
“I’m confused,” Violet answered back. “It sounds like you had an amazing time.”
“Exactly! And now I very well may end up as one of those stupid girls that he breaks up with in my coffee shop.” Getting far too worked up, Gaby stopped running and bent over as far as she could to help with her breathing.
“Calm down,” both friends said in unison as Violet rubbed her back with enough effort to help calm her nerves.
“Lord help me.” The words fought to get out. “What if he breaks up with me in my own coffee shop? How humiliating.” Gaby was getting ahead of herself, but she couldn’t help it. Last night went far too well. Now she was hooked and wanted more of Dylan Hart.
Violet replied first. “Babe, that’s not going to happen. Plus, you’re a strong woman. You can have a good time with this guy and not allow yourself to fall in love until you’re ready. Remember, you’re in charge of your own heart.”
“When has the heart ever let someone make their own decisions?” Gaby replied with a little more annoyance in her voice than she planned.

Aubrey Parr writes contemporary romance and romantic suspense, but is digger deeper into her darker side. She lives outside of Chicago with her husband, daughter and houseful of pets. Though inspired by her great-uncle, author Evan S. Connell, Aubrey didn’t publish her first novel until after turning forty. Now there’s no turning back. She drinks coffee until it’s acceptable to have wine and loves to travel. She’s always planning her next trip. When Aubrey isn’t writing, she can be found with a book in her hand.