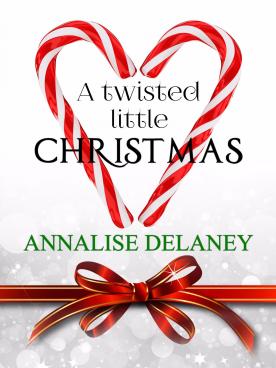 Facing a lonely Christmas Eve, Devin O’Hannigan accepts a stranger’s invitation to a private holiday party—hoping to score. But when the merriment takes a bizarre twist, he retreats by himself to call it a night… Until his attention is captured by a teary-eyed Santa in a very short skirt.

Holly’s quest to find herself again ends in a disastrous Christmas date, leaving her discouraged and alone in a town far from home. But when her date returns, angry and violent, she’s rescued by a gorgeous stranger—the kind of guy she once would have pursued. But that was before.

Seeking cheer but preferring anonymity, they embark on an innocent game playing the roles of old friends catching up. Without encumbrances, honest conversations uncover hidden desires. Sparks fly, directing them to an outcome they hadn’t expected and shouldn’t pursue. But will it thrust them into each other’s arms or leave them longing for what could have been?

He polished off his first bourbon and sipped on the second, deciding he should hang it up and head home once he finished it. There was really no point sitting here feeling sorry for himself.

The restaurant door opened, and a girl came through, causing him a double take. It was the bouncy girl from the kink party, the one in the super-short Santa dress. Only she wasn’t so bouncy now—wiping away tears.

Devin was immediately annoyed. He’d never liked watching a girl cry—least of all, a pretty one. Worse, something had upset her on Christmas Eve, and that pissed him off even more.

Noticing the other guests, she struggled to pull her skirt lower, although there was little chance it would help—he’d seen the back of that dress at the party, and it showed off some amazing assets.

Staying mostly hidden behind the column, he observed as she approached the bartender.

“Is anyone attending the front desk?” she asked, her voice quivering.

Shaking her head, the bartender explained that the night manager had taken an extended dinner break due to Christmas Eve, but he’d be back in an hour or so. “I’m pretty much in charge until he comes back,” she added. “Can I help you with something?”

“My key card,” she said. “I left my purse in my…in my date’s car. And things didn’t work out so well between us.” She paused. “I just need to get into my room upstairs.”

“Oh,” the girl replied from behind the counter, her voice empathetic. “I’m so sorry. I don’t have any way into the rooms. If you can wait for Adam to get back, he can handle it, I’m sure.”

The pretty strawberry-blonde girl shook her head as more tears appeared. She looked around and leaned in closer, making Devin strain to hear what she said next. “I don’t have my phone, my ID, money, or anything,” she explained. “I’m only here overnight, and I don’t even have a coat to cover up in while I wait.”

Nodding, the little bartender reached behind the counter and pulled out a jacket. “It’s not very long, but it might help some.”

Taking the jacket, Strawberry thanked her and draped it around herself, avoiding eye contact with the older ladies who openly shared some disapproving glances.

“Here,” the bartender suggested, “let me clean off that table in the back, and you can wait there. It’s kind of private.” She came out from behind the bar and headed to the table, wiping it clean and gaining Strawberry’s immediate gratitude.

Devin tried to remember who’d he’d seen her with at the party. His first glance at her had been when he’d arrived. She was on her way up the steps and into the house, and he had, quite honestly, been focused on her ass and not her companion.

But then he recalled a big guy taking a drink out of her hand and downing it himself shortly after they’d arrived. Not something he would have probably given a second thought to if it hadn’t been for the two drink max rule. That guy had consumed his own two drinks and hers.

Something about the girl drew him to her, and he fought with himself to just let it go. He probably shouldn’t press his luck with any more women tonight, least of all one who was already in tears. But when he had the chance to finish his drink and bail, he paused, setting the tumbler down nearly untouched.

Wrestling with himself over leaving or not, he saw the bartender pour another drink, smiling when he recognized what it was. A cranberry and cinnamon whisky sour. And she used the good whisky, too. He followed her as she walked it back to the pretty girl in the booth and stood talking to her.

When the restaurant door opened next, a big guy walked in, carrying a purse.

It would have made the perfect opening to a bad joke, and Devin normally would have laughed, but this guy had a pissed-as-fuck sneer and made a beeline straight for Strawberry.

The bartender turned around when she noticed the expression on Strawberry’s face, quickly making one of her own as the guy closed the distance across the room. Devin slid off his barstool on instinct as he watched the little bartender step away from the table. Without so much as a word, dickhead grabbed Strawberry by the arm, eliciting a shriek from her and sending Devin sprinting.