Sometimes, the most painful secrets need to be revealed, before you can find true love.

Tess Reynolds has idolized her older brother’s best friend, Connor McCoy, since he came to her rescue in fourth grade. But a young girl’s worship morphs into something deeper, and on the night before he left for college Tess professed her love.

Connor never returns those three little words, instead he gives Tess her first kiss, tells her not to wait for him and leaves.

Order and control are the only things Connor wants in his life, it’s how he keeps his loved ones safe. Years ago he learned the hard way that loss of control causes distractions that can lead to devastation. Because he craved Tess with every fiber of his soul, she became his biggest distraction. In order to protect her, he had to keep his distance. But when she ends up at a college only minutes from him, Connor’s restraint snaps and they end up creating more firsts.

Now, years later, they are both back in Bedford Park, and Tess has a young daughter that no one knows Connor is the father of. Secrets they’ve kept from their family and friends are about to be revealed but they both have secrets they kept from each other. Will those secrets destroy what they have? Or will their long history and love be enough to build a trust that will lead them to their happily ever after? 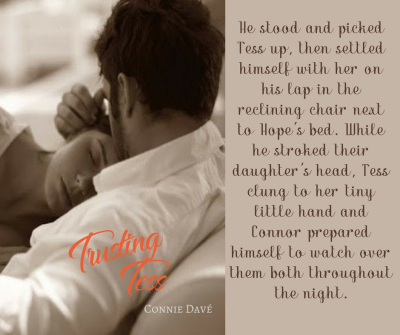 What Tess had done for him tonight was beyond anything he could have imagined. She
didn’t look at him with pity or tell him his feelings were unfounded, like most everyone else had since his sister died. No, she acknowledged what he was dealing with, understood it, accepted it. Even though it’s a memory he could usually never bring himself to talk about, it had been rather easy to share it with her.

As he laid her on their bed he vowed to make tonight all about her and how much he loved her, respected her, craved her. Connor appreciated the fact she was still leery about him and his ability to commit, to not leave her and Hope like he had in the past. It was now his mission to show her he meant what he was saying by worshiping every inch of her body with tenderness, love, and understanding.

As his eyes raked over her lying on the bed, he slowly removed his clothes. Tess gracefully sat up and mimicked his movements until she was completely bare sitting on her knees, her arms stretched out toward him like the brilliant glow from a lighthouse, beckoning him. She would guide him away from the rocky shores of his guilt, and welcome him into the safe harbor of her embrace. A place he felt happy and secure, a place he would never want to leave 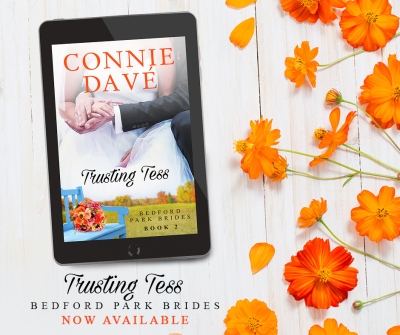 Connie Davé resides in a small Midwestern town, where she has lived all her life. Growing up she was a tomboy who had a love for all animals, the outdoors and riding horses. In her early twenties her mother introduced her to romance novels and from then on she became a voracious reader and lover of all things romance. For many years she had a secret desire to write her own romance book but never pursued it. After getting married to her own real life hero she continued to read as she raised their two young daughters.

Once her kids were older, thoughts of writing her own novel made an appearance again. With the support of her husband, daughters, family, and friends she wrote her first book, Finding Faith. Completing the first novel felt like an awesome achievement but it also opened her mind to many more sensual, small town, happily ever after stories she wants to share.