Forever Valentine PR and More is proud to present the release blitz for Aubree Valentine’s Come Back to Me.

Available Now:
http://amzn.to/2yxltpW
Exclusively on Amazon and in Kindle Unlimited!

Blurb
For some, the Army is a means to an end. For Bryce Matheson, it quickly became his life. He had no time for relationships or the drama that came with them. Instead he played the field, often taking a different woman every night. Until Lacey. She was supposed to be another conquest, one night of unbridled passion. But she didn’t fall for his charm, instead she challenged him. Never known to back down from a challenge, he accepted, thinking he would get her out of his system and move on.

Lacey Halloway didn’t have time for men. Especially men like Bryce, a man married to his job-who would inevitably disappear for months at a time leaving her waiting at home. She wasn’t interested in that kind of life, but Bryce was charming. And hot. Checking off all the marks on her list with his tattoos and bad boy attitude. Except he wasn’t a bad boy at all, outside of being a solider. Agreeing to one date, and the promise of a night she’d never forget; she quickly learned her heart wasn’t safe from falling.

When one night turns into something more and a war threatens to destroy the man she fell in love with, can Lacey handle the change? Can Bryce claw his way back from a near death experience and be the man he thinks Lacey’s deserves? Or will he come back to her at all? 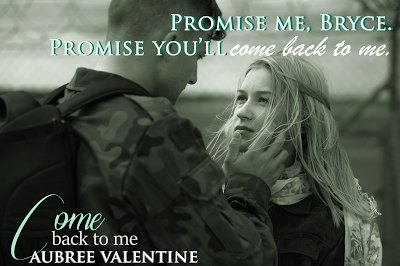 Aubree Valentine lives with her husband, twins, and her dogs in Southcentral Pennsylvania. She has always been a writer, from short stories to just ‘words’ from her heart, wanting nothing more, than to one-day push publish on a work of her own. The desire to chase her dreams only grew stronger as she got her start in the Indie world, as a PA for two amazing authors, and began blogging. As her kids approached school age, she decided it was finally time to take the leap of faith.

When she’s not writing, she can be found chasing after her twins or her dogs, curled up with a good book, or still working with some of her favorite authors.

She loves meeting new people and interacting with other readers.

Check her out on social media: