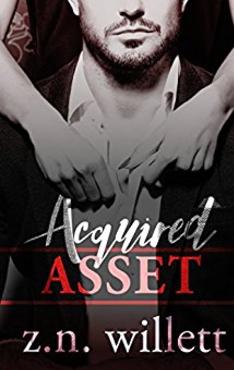 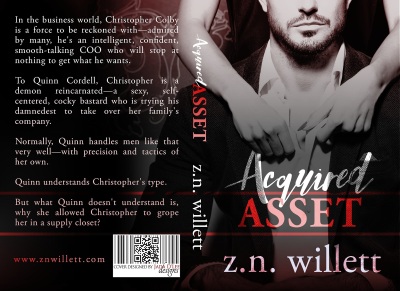 In the business world, Christopher Colby is a force to be reckoned with—admired by many, he’s an intelligent, confident, smooth-talking COO who will stop at nothing to get what he wants.
​To Quinn Cordell, Christopher is a demon reincarnated​—​a sexy, s​elf-centered,​cocky bastard who is trying his damnedest to take over her family’s company.
​Normally, Quinn handles men like that very well—with precision and tactics of her own.​ ​​​
Quinn understands Christopher’s type. ​
But what Quinn doesn’t understand is, why she allowed Christopher to grope her in a supply closet?

Hello?”
No answer.
“Vanessa?” I called out through the open door.
“You’re late! Shut the door behind you.”
Somewhat put off by his tone, I stepped into the suite and walked toward the room from where the irritated voice had originated. “Stop,” he ordered.
Surprisingly, my body did just that.
The voice was coming from behind a large desk. The man’s high back chair faced the long, reflective window. He was obviously a tall man and a sloppy one at that. The toffee dark strands of his hair stood straight up from behind.
I was about to point that out, along with his rudeness, but then he reversed his chair.
He was no sloppy man.
The man who sat in front of me was a beautiful mess. His chiseled jaw sloped downward as his eyes stayed glued to the iPad that was in his hands. His mop of hair looked as if he had just run for miles, yet
his starched tux shirt said otherwise.
I’d frozen, mesmerized by his beauty. Then my senses came back to me. “Hello, I’m—”
“I don’t need to know your name, sweetheart. Take off your clothes.”
I gawked at him for a moment. “Excuse me?”
He never took his eyes off his iPad as he spoke in a miffed tone. “Be a good girl and take off your clothes.”
Still speechless; I watched as the man stood—taller than I expected and very fit—and walked over to a credenza, poured himself something to drink, and then faced me. When my blue eyes met his green ones, I actually considered his request for a split second.

ZN Willett started sharing her first contemporary romance, The Trouble with Dating a Movie Star, online. Receiving an overwhelming response of over 2 million reads, she created the Red Carpet Series. The Red Carpet Series showcased a unique perspective spotlighting Hollywood from the inside. ZN enjoys creating heroines who are strong, intelligent and true to themselves. She’s a northern girl, but a southerner at heart with a deep love for all things shoes. Deep down ZN is a sappy romantic who happens to believe that love can truly conquer all.