Title: Maliciously Obedient
Series: Obedient #1
Author: Julia Kent
Genre: Romantic Comedy
Release Date: January 14, 2014
Blurb
Lydia’s new boss stole the job she wanted and he thinks he owns the place
already on Day One.
Turns out — he actually does.
She can’t control her attraction to Matt, the man with stormy eyes and a
penchant for kissing her in the supply closet, the elevator, and in her
increasingly intense dreams. And then there’s his best friend Jeremy…
But Matt has a secret — he’s really Michael Bournham, playboy
extraordinaire and the CEO of the company, and he’s doing a reality television
stunt. For six weeks he’s pretending to be a middle manager while producers
video tape everything.
Everything.
Including the moment he and Lydia give in and break every rule.
And, perhaps, their hearts.
The Obedient Series includes:
Maliciously Obedient
Suspiciously Obedient
Deliciously Obedient
ADD TO GOODREADS 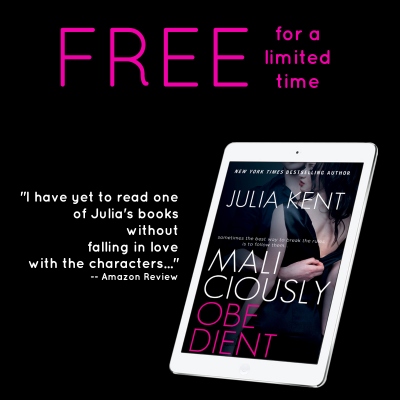 Excerpt
Getting
caught reading Fifty Shades of Grey in the parking lot at work wasn’t the best
way to meet her boss. A boss she didn’t know she had. A boss who now had the
job she had been waiting to apply for (and win) for the past year.
So Lydia
Charles was having a very bad day. And it was only 7:32 a.m.
Tap tap
tap. She looked up, startled, to find a pair of bright green eyes, shaded by a
hand, peering in the window of her little red car. He caught the book cover and
smirked.
Oh, screw
off, she thought, shoving her car key in the ignition and turning it on so she
could roll down the window. As if it weren’t bad enough being caught reading
Mommy Porn (and she wasn’t even a mom), her last few minutes of freedom before
enslavement as a corporate drone were being bothered by some anonymous
guy.
Light brown
hair with a nice wave to it and those crazy-green eyes. A perfect nose. Broad
shoulders set off by one hand on his forehead, one on his hip, making his
forearms pop a bit, the muscles from neck to shoulder joint stretching like an
athlete’s. It was like looking at one of those guys on television, an actor in
a show you watch not for the plot, but for the eye candy with a spark of smarts
and wit.
If he told
her he was a firefighter or a detective, she’d believe him. He had the look of
a man who takes care of himself because he has to in order to function well at
his hands-on job.
He works
out, she surmised as the window scrolled down. Boring business-casual uniform
of Dockers and a button-down shirt. Couldn’t see his shoes but she guessed
something from Land’s End.
Middle
management.
Which was
one step above her. Gritting her teeth, she wondered what this was about.
Author Bio

New York Times and USA
Today bestselling author Julia Kent writes romantic comedy with an edge.
Since 2013, she has sold more than 1.5 million books, with 4 New York Times
bestsellers and more than 16 appearances on the USA Today bestseller list. Her
books have been translated into French and German, with more titles releasing
in 2017. From billionaires to BBWs to new adult rock stars, Julia finds a
sensual, goofy joy in every contemporary romance she writes. Unlike Shannon
from Shopping for a Billionaire, she did not meet her husband after dropping
her phone in a men’s room toilet (and he isn’t a billionaire). She lives in New
England with her husband and three sons in a household where the toilet seat is
never, ever, down.
Author Links
WEBSITE
FACEBOOK
FACEBOOK GROUP
TWITTER
GOODREADS