The end is almost here, the final book in the Bellator Saga is coming in THREE days!

“All of your ideals, your hopes and dreams…they cease to matter if you abandon them in your darkest hour. We have to see this through to the end.”

Jack McIntyre and Caroline Gerard have never shied away from a challenge. As dual commanders of the American rebel forces, they now face the greatest adversity of their lives. Every decision has permanent consequences. Relationships are tested and restored. Hard truths come to light. When the reality of their situation finally hits them, there is one thing they know for certain.

No sacrifice is too great for love. 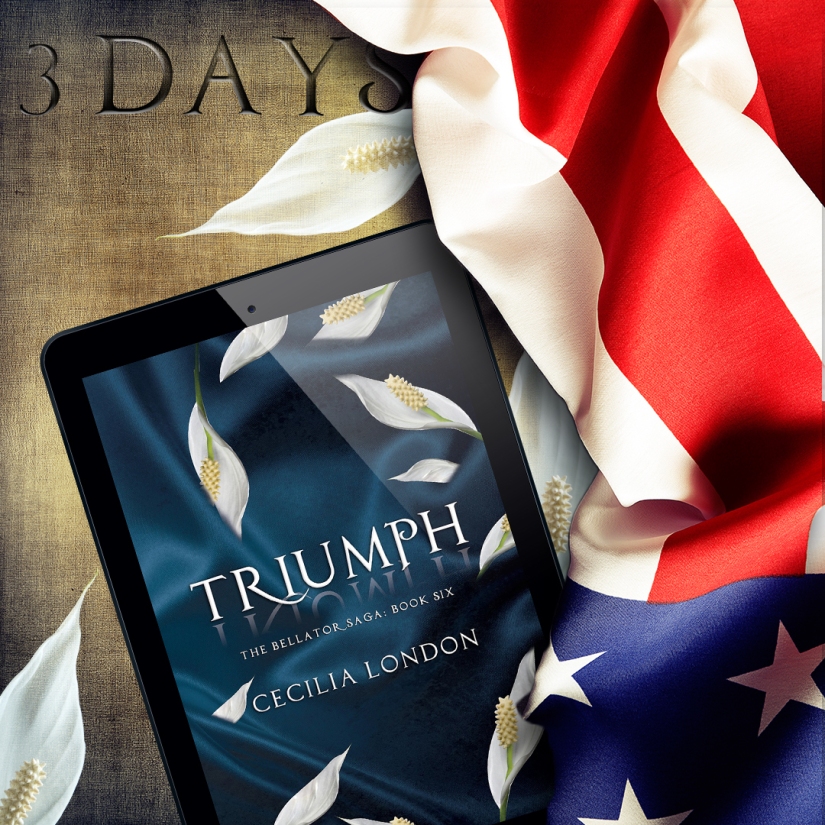 Q & A with the FABULOUS Cecilia London

I had the pleasure of asking the person who gave us Jack some questions,

and here is how it went!

1. When you began writing The Bellator Saga, could you have ever imagined that some of the things you have written about within the political aspects of this series, to beginning to unfold in the United States today?

I’ve read my fair share of dystopian fiction. The cautionary tales. And that’s what I considered The Bellator Saga to be. As time went on, the dynamics changed. I can honestly say that each day brings us closer to eclipsing the horror I imagined in this series. It’s a lot to handle emotionally, mentally…even physically.

So I guess the short answer is, yes, I could imagine it, but right now reality is exceeding my imagination. Which is frightening as hell.

2. Have you been able to incorporate any of your own personal experiences in this series?

Many of Caroline’s experiences as a prosecutor are based on my own. Jonesie is based on a couple of real defendants I prosecuted. Gig is a composite of a few cops I used to work with back in the day. And there are bits and pieces here and there – inside jokes with friends from college or law school, names, random anecdotes…I threw everything at this series, LOL!

3. As a writer, what would you choose as your mascot/avatar/spirit animal?

Well, I love hippos (like Caroline, LOL!) but that’s too easy. I love me some Crackle from Sofia the First. My husband and daughter got me a Crackle stuffed animal when I had gestational diabetes in 2014. I was pregnant with my son and couldn’t eat fun foods anymore. So instead of chocolate, they got me a fluffy. I keep her with me when I write. A fire-breathing dragon who just wants to be luuuuuurved? Totally me. 😉

4. What is your writing Kryptonite?

I write out of order, so sometimes putting those filler scenes is a pain. I hate hate HATE writing first drafts but love editing. Some of my best lines come during the editing process.

5. What’s the most difficult thing about writing characters from the opposite sex?

Making sure I get the voice right. Writing Jack from Caroline’s POV was easy, but making sure I got his tone correct when writing scenes from his POV was a bit tougher. I think I did an okay job of it, though!

6. What is the first book that made you cry?

Oh, Jesus. I have no idea. I wouldn’t be surprised if it was The Diary of Anne Frank.

7. Were there any really good scenes or portions of this series that you edited out?

Indeed there were! In fact, one of them is going to be a bonus scene in a box set that will release in March. It’ll contain Dissident as well as over twenty other books from other authors, and I’m going to give fans some bonus material at the end…an extended, uh, romantic flashback scene from Triumph! Y’all got the short version…now you’re gonna get the whole thing, but only in the box set!

8.  Do you read your book reviews? How do you deal with bad or good ones?

I do. The bad ones I try to ignore. I’m generally able to laugh them off, and I get a kick out of the ones that say there’s too much sex…right next to the reviews that say there isn’t enough. LMAO, you can’t win! The good ones humble me. You all are so quotable sometimes. It’s so cool to see how people interpret the same words so differently.

9. What has been the hardest scene to write in The Bellator Saga?

The scene where Jen tells Caroline that Katie is dead. Still can’t read it, cried while writing it, hated myself for doing it. It had to be done, though. Oh, Katie. I love you so.

10. Do you hide any secrets in your books that only a few people will find?

Oh yeah, there are a few inside jokes here and there. Mostly with longtime friends, etc. But half the time I put stuff in that I don’t even notice until months later, so I may have left a few for myself too! LOL!

11. What literary pilgrimages have you gone on since beginning The Bellator Saga?

I’ve been hoarding romance novels I buy at our downtown library bookstore. Does that count? Hopefully I can make pilgrimages to my home library someday, once I build it. 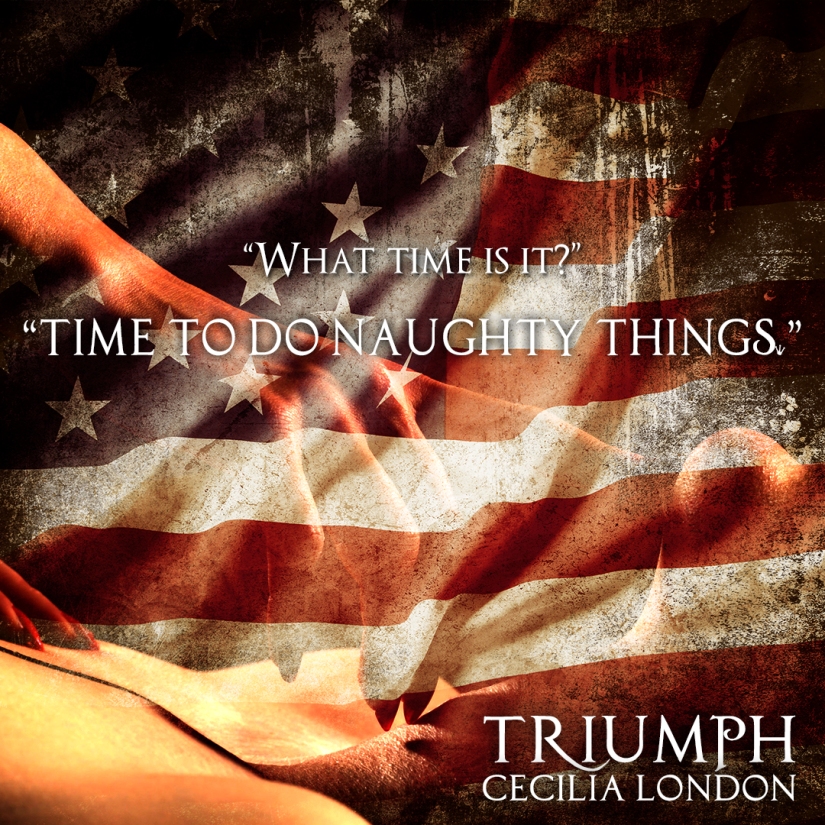 First of all let me say, I fell in love with this series 2 years ago when I won a giveaway of the first two books. I was skeptical at first; not thinking I would enjoy anything with a political element to it, but boy was I wrong. I was IMMEDIATELY hooked. Cecilia pulled me into a world that blended the politics of The Hunger Games, with the drama and sexiness of Scandal. Or at least that was what this series was to me and I was immersed in it on page one of Dissident. I have followed Cecilia London ever since then, read all of the series, and her work has just gotten better and better and I couldn’t have been happier with how the series ended in Triumph. This series has made me cry, cringe, laugh and pretty much experience every other emotion imaginable during their journey. I don’t want to give away anything in this book, I feel like everyone just needs to experience it for themselves, so I will be straight to the point and leave out spoilers.

This last installment of The Bellator Saga, Triumph, picks up right where Rhapsody left off. We get all our questions answered in Triumph, I promise! As long as you’ve read all the other books in the series, you probably had the same questions I did at the end of Rhapsody: you would be right with me wondering if the tip they got at the end of Rhapsody is true. Could her daughters still be alive? Is there a chance Chrissy and the girls survived and made it to Canada? What will happen with the rebellion? Will Caroline get her revenge on Santos? Will the United States shift back toward Democracy? Let me just say, by the end of the book everything will be answered. The way everything plays out on paper was so easy to visualize, Cecilia made it so seamless and it flows so well that I don’t know if/when this is made into a TV series/Movie it could be better than my imagination has drawn up. It’s been a fun series to read and to go along with. It was has so much angst throughout this last book and even more sexy times between Jack and Caroline. Lets face it, Jack is just… *Swoon* Although this last book doesn’t have as much Jack and Caroline sexy time like some of the other books, the scenes Cecilia has added were so well placed and laid. (Although I wouldn’t mind more of Jack, Cecilia!)
It has been such a journey to go on in this series and I have enjoyed every minute of following Jack & Caroline, as well as seeing how everything plays out for all our characters in The Bellator Saga. I can only wish that someday this series will become so much more and end up on our TV’s so we can SEE Jack!  This being a 6 book series, please don’t be turned off and think it’s too much to read. The Bellator Saga is just so astonishing and has such a gravitational pull too it, you will actually wish it is more than just 6 books! Bravo Cecilia and I can’t wait to see what you deliver to us next!
*I received an ARC copy of this title at my request,
and have provided this voluntary review*