I’m good in a boardroom, but I’m better in the bedroom. Much better. I can charm the skirt off any woman in one encounter. I’ll even give her an orgasm before I put her in a cab. Or three. No more or she’ll start making plans for the future and I’m not into that.

Or I wasn’t until Genevive Fasbender. She’s the first woman in five years that I want to spend the whole night with. And she’s the first woman who’s told me I’m not what she wants in a lover, even after multiple O’s. She’s brash and bold and stubborn as hell, and she doesn’t believe it’s possible to satisfy her.

But I’m up for the challenge.

And after an incident in my brother’s office closet―a downright dirty incident―I think I’m just the guy to deliver.

Five minutes later, the valet pulls up with my car. Genevieve raises an eyebrow. “A Bugatti?”

She shakes her head, and I swear I hear her mutter something about rich men and their toys, but I don’t respond, too occupied with inspecting my car and then passing the attendant the cash I promised him earlier for returning my vehicle in perfect condition.

I slide into the driver’s seat, and when I look over at Genevieve as she buckles her seatbelt, a wave of pure, unadulterated lust rolls through me. I’m very aware that I’ve trapped her, that she’s now defenseless to my whims. Not that I’d take advantage, but goddamn, to think that I could…

I nearly shiver at my own vile thoughts.

Glad she can’t know what I’m thinking, I flash her a smile. “So. Where am I taking you?”

“I’m staying at the Park Hyatt on 57th Street.”

“Fancy.” The Park Hyatt is one of the nicest luxury hotels in New York. That means this girl has money, which isn’t a bad thing. Just, the swell of my wallet in my back pocket is usually one of my better attributes. If wealth doesn’t attract her, I hope I’m not shit out of luck when it comes to getting an invitation up to her room.

Apparently, I’m transparent because she asks, “Not impressed?”

“Quite the opposite. I’m worried you won’t have a reason to be impressed with me.” Now I’m the one who can’t believe how honest I’m being.

“It’s a valid worry,” she says after a beat, and I can’t tell if she’s teasing or being blunt. Can’t tell if I should prepare for gut-wrenching disappointment or dive into another round of sexy banter.

I concentrate on my driving instead, speeding up before slipping expertly into a tight opening in the adjacent lane.

“Smashing,” she says with a tone that vibrates through my body like I’m a tuning fork.

Then, abruptly, she laughs, and I turn my head toward her, alarmed at the source of her amusement.

“I still can’t believe you drive a Bugatti in the city. I can’t decide if that makes you brilliant or as mad as a bag of ferrets.”

“Brilliant, of course.” Though, with her so close, I feel more like I’m going crazy. “What can I say? I like things that are fast.”

“You don’t?” I raise a questioning brow. “Maybe you don’t understand how awesome fast can be.” I put my foot on the gas and race down the next block to prove my point.

The traffic light turns red as I approach the intersection, and I ease the brakes. “See? Fast is fun.”

“The problem with fast is it’s over too quickly.”

Is that innuendo? Her gaze pierces into me, and the air around us feels tight and charged, and I’m suddenly certain that I will die if I don’t get to taste her tonight.

Even if she didn’t mean anything more when she made her statement, I certainly do when I say, “Don’t worry. I know when to take my time.”

She exhales, slowly, and I swear I can feel it. As though she’s already in my arms and her breath is grazing every inch of my bare skin. No matter what happens after this, I know she at least feels this…this attraction. Or whatever it is.

Her voice is low and sultry when she replies. “You’re not talking about cars anymore. But do you really take your time? I’d guess you bolt the minute you’re finished.” She’s so blunt, so direct, and I don’t know if it’s a her thing or an English thing, but I like it.

I also like this conversation we’re having. Because we’re drawing the lines, and that means the potential for tonight is high. So I answer with a nod, making sure she understands that she’s correct in thinking I’ll bolt. Because I will. 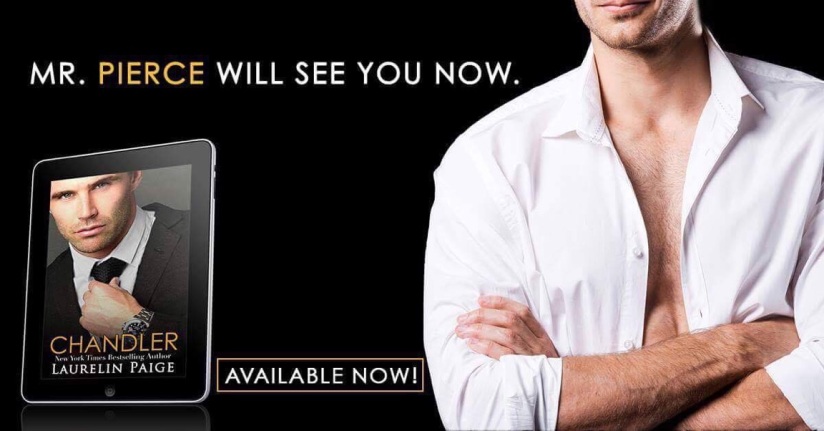 Laurelin Paige is the NY Times and USA Today Bestselling Author of the Fixed Trilogy. She’s a sucker for a good romance and gets giddy anytime there’s kissing, much to the embarrassment of her three daughters.

Don’t miss a release. Sign up for Laurelin’s Newsletter: http://eepurl.com/Q0glD

I love Laurelin’s books. I always have, and Chandler was no exception to that. This was my first book of the series, even though it is book 5. It is a stand alone so that didn’t matter that I was just starting at this point.

In Chandler we meet Genevieve and of course Chandler. He is quit the character; sexy, dominant, arrogant in his own way, powerful, and very good at his job. He doesn’t want the commitment of a relationship, or even a one- night stand. He prefers to just love-em and leave-em when he’s done. Like immediately when he’s done. He is thrown off his game when he meets Genevieve and she is everything in the bedroom he’s dreamed of. That is until she throws it back in his face that he can’t provide her what see is looking for. From that moment on he’s determined to win at this game, and win her over. He becomes a very fun and flirty personality that I just adored. I love his determination to over come Genevieve’s obstacles. These two are perfect together and I just adored this story. I can’t wait to go back and read about the others in this series now. Because knowing Laurelin, I’m sure the others are just as amazing!